From the age of five, I lived in one of the classic perfect cities, San Francisco. In my hometown (more a village), Paris Hill in Maine, I had had the freedom to wander into the woods, up and down the road, across the way into the golf course and climbing all the trees within sight. The restrictions of an urban area seriously cramped my wandering ways, not to mention my love of green, open spaces.

All the same, I found ways to embrace the concrete confines once I went to school. No longer were my playmates the three children from the farm up the road but the children of my Haight-Ashbury neighborhood. All the joys and pitfalls of urban childhood were mine. The joys were the children from every possible culture and background. The Haight-Ashbury Neighborhood Council offered community gatherings that included talent shows and pot luck dinners. 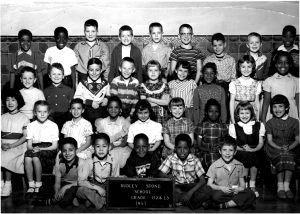 Imagine a five-year-old from a small village in rural Maine having the opportunity to taste Cajun and Caribbean, Indian and Indonesian, Mexican and Chinese cooking in the company of classmates whose parents had prepared all these dishes.

This photograph of my class at Dudley Stone School says everything that I loved about my school, my neighborhood, my city and my childhood.

I grew up in other neighborhoods in San Francisco and was a resident of the Noe Valley district when I met my husband and moved abroad. Through all the years that I lived in Europe, I held San Francisco in the highest regard. I gave talks about this amazing city. I wrote articles glorifying the beauty of its cosmopolitan, humane blend of all that is wonderful about humanity. The City by the Bay forged my deep love of, and awed respect for, the strength and joy of humanity.

My husband and I chose to return to San Francisco in 2011. Within weeks, I realized that the city of my childhood had changed irreparably. The poison had been injected in the so-called Summer of Love, infiltrated and metastasized to engulf every aspect of civil society. In a city that needed no help to be “diverse”, the drive to diversify had crippled natural development of community, had divided those who had come to love their fellow citizens, had turned classic beauty into garbage scows, safe streets into shoot-up alleys and urinals — a place of which my 10-year-old grandson said, “This place stinks.”

My love for the city of my childhood, youth and early womanhood died gradually and reluctantly. I still grieve for what has been lost. My novel, Salsa Dancing for Pterodactyls, is a love story about the city that once was. I leave it to others to glorify the streets of litter and excrement.

Dancing the Blues Away

The City as Character

From Chapter 2: That evening, Emily, just another available female in a city already jammed to the shorelines with unattached women, wrote the date for the summer performance in her diary with no certain commitment that she would dance.